ILC grows as a learning network and it’s important to understand how trainings are perceived and what they contribute to change in the life of participants and their organisations. This double interview introduces the experience of Motlanalo Emily Lebepe (Mo), from NKUZI – South Africa, and Nasieku Kisambu, from WE EFFECT - Tanzania. They both attended the “Transformative Leadership for Women’s Land Rights” (TLWLR) workshop held in Nairobi City from the 9th to 12th of December 2019.

Beyond the training: from learning to action

NASIEKU - This workshop was different from other trainings I attended. I coordinate work on land rights in Tanzania with seven partner organisations, and I shared the knowledge acquired with other colleagues from East Africa (in particular from Uganda and Kenya). Thanks to the training our work on women’s land rights improved, especially with regard to advocacy.

It gave me the opportunity to establish a connection with my personal experiences, while going deeper in my daily work.

I conducted a training for these partners in March, involving also their communities in three regions: it was very appreciated, but we had to hold it due to COVID-19 crisis. Nevertheless, we managed to reach relevant stakeholders, such as the Ministry of Land for Tanzania, and to successfully involve local actors, such as cooperatives and grassroots groups. We also designed advocacy plans until 2022. I also discussed with ILC Africa how to further share this knowledge with other ILC members involved in NES Tanzania.

MO - I really appreciated the training, also because I came across WIDGRA project already in 2018, when the CSO platform met in Madagascar and Nkuzi was one of the few ILC members involved in producing the baseline. In January 2020, after the training in Nairobi, Nkuzi launched a Training of Trainers on Community Engagement Tool reaching a total of 24 participants, i.e. 17 rural women, 3 Nkuzi staff and 2 colleagues from NES members organizations (LAMOSA and ALLIANCE FOR RURAL DEMOCRACY). The training paved the way for about 14 local trainings where trained women were supported to replicate what they learned in their respective villages. The original plan was to support the replication of the training in at least 20 communities, but the COVID-19 crisis affected our plans too!

Nevertheless, we managed to do some advocacy work with women farmers and women from communities affected by mining. Women farmers were able to engage local farmers in relations to leadership composition (as women were left out despite being the majority of farmers ). The results were that women farmers are now part of the leadership group. Some women who participated in the workshops shared their success stories of resistance to mining initiatives to a point of getting fair compensation. Others are still active actors of resisting land dispossession and advocating for active participation in decision-making in land development.

The training had a significant impact on our organisation as it helped shape our work on women’s land rights and pushed us to interact in a positive, supportive and encouraging way with women, towards playing an active role in their development and empowerment.

It also contributed to ensure that women’s voice is listened and grassroots organisations are involved in women’s land rights; this is crucial, including in response to the COVID-19 crisis! 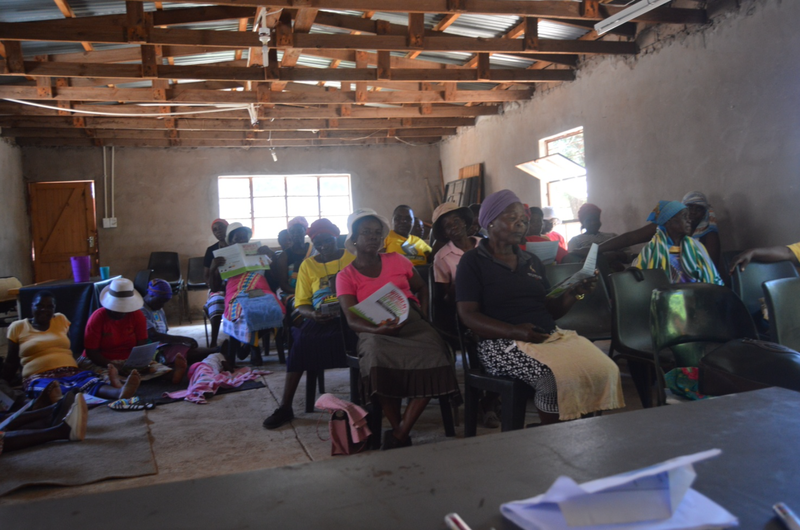 NASIEKU - I was appointed to work on this area and to coordinate it at regional level, with three countries, which now represents 50% of my tasks. Overall, my organisation and the management were supportive and committed.

This workshop had a significant impact on my career: now I sit with the regional director to discuss the annual workplan and I insisted for We Effect to engage more on land rights!

Furthermore, We Effect is part of Stand for Her Land campaign, that focuses on customary land and joint titling, and I plan to replicate the methods learnt within this campaign.

MO - Before I defend others people’s rights, I need to identify my relationship with land and how it affects others. This also makes me to forge links with others within family, communities and at work, to promote women’s land rights.

As women's rights defender, what I learnt during the workshop contributed to make my claims more solid and grounded; enabling me to see how effective change starts with oneself.

The training offered a broad feminist and women’s rights approach, supporting and encouraging women to take the lead. As organisation we are concerned by gender based violence, and we try to mainstream gender justice in ou land rights work. We are all learning together and we are all vulnerable, but since we are all together we don’t feel discouraged, rather strong!

The challenges of the learning journey

MO - The most challenging aspect was to get everybody on the same level, in particular male colleagues who sometimes are not supportive: when we talk about women’s rights it looks like it is not important! Something similar happens at community level: traditionally women’s roles keep them away from decision-making.

It is crucial to involve men and women together in all meetings and raise awareness to support women in claiming their rights.

NASIEKU - For me, becoming responsible of such advocacy work is challenging as it implies more responsibility due to growing relevance of women’s land rights in Tanzania. As I mentioned before, I am now in charge of working closely with partners in Tanzania and I aim at reinforcing connection with other organisations in the region, in particular in Kenya and Uganda.

Reinforcing and improving joint work is my main challenge!

Interaction with our partner organisations (mostly cooperatives) is also challenging : they are small organisations, with a quite basic understanding of women’s land rights. Perceptions and aptitudes in this context require a very practical approach to facilitate the understanding of the issue and the implementation of the learning. Contextualisation is crucial to promote awareness and overcome possible confusion. All of this has been taken into account in advocacy plans.

Eventually, the current situation of Tanzania, with shrinking civic space for CSOs due to restrictive laws and regulations, represents a challenge for all organisations working on advocacy: institutions become less supportive and this must be taken into account. On top, the impact of COVID-19 on the possibility to implement advocacy plans is not negligible. 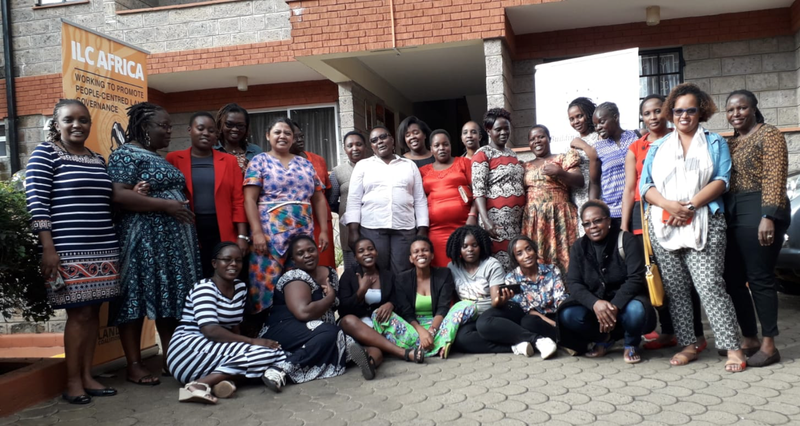 The importance of relevance, replicability and innovation in a training

NASIEKU - I had the opportunity to connect what I learned to personal experiences, which entailed good opportunities for reflection. At the same time the skills acquired were very practical.

What I learned was pertinent to my work and put me in the position to understand different frameworks and deal with multiple components involved.

From an organisational perspective my participation to the workshop contributed to give an input to rethink the way we work and ask ourselves: where do we want to go, what do we want to change, which framework is the most pertinent for our mandate and, above all, what is meaningful for the people we work with?

MO - The skills we acquired were not only relevant to my organisation, but also flexible and easy to replicate, hence also adaptable to other areas of work beyond women’s land rights. This helped undertake a transformative agenda, from the self to the external world, moving beyond the traditional approach.

I wish that all our community partners could be exposed to these skills. It would be crucial for communities to be able to advocate on their own, and especially after COVID-19. The need to work on self agency and self organisation emerges as critical now, and beyond the pandemic.

The link with 'women for women' and the 'leadership programme'

NASIEKU - There was a close linkage between this workshop and Women for Women; in particular for me, as my mentor was also present and we had the opportunity to discuss with her - including on how to apply the skills acquired.

MO - I would put emphasis on trust : indeed this represents a core element, both for the work and to engage with other women at community level. When we build confidence in ourselves we are building organisations’ confidence to move forward. This represents for me the main link between the workshop and the Leadership Programme. 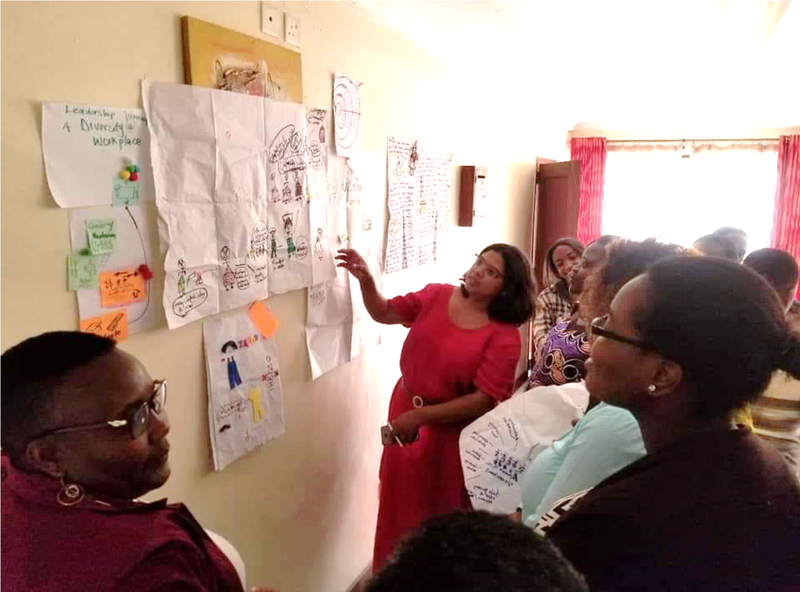 NASIEKU - It is important to maintain the connection after the training, in terms of tracking and monitoring - as you did with this interview- and to receive support to keep things going. This would keep you active and connected and encourages participants to put the learning into practice

MO - It would be great to replicate this training in other sub-regions and there should be more emphasis on involvement of grassroots women (there were several from Kenya, but only two from other countries). If trainings are organised at sub-regional level this would increase their participation, and would benefit CSOs and ILC members more broadly. We also need to take into account language dynamics: moving it to sub-regional levels would make English not compulsory … not everything has to be in English! It would also be good (and inclusive) to design learning materials in other, more inclusive, ways beyond manuals! (e.g. pictorial, comics and including other narratives).